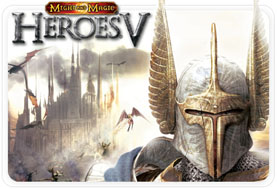 Freeverse just released the Mac version of Heroes V for the Mac. This is a cool series of games. I used to play 3 a lot, so I thought I’d give this one a try. It’s also running on Cider, a WINE-based set of code that allows Windows binaries to more-or-less run unmodified. I thought it would be cool to see this work. $50 for a download version – 1.5GB later and I’m ready to play. I should have waited.

My God, this thing is the most buggy piece of crap I’ve ever seen.

Let’s start with with memory leaks. I have 3GB in my MBP. With nothing else running, within an hour, Heroes will have used all of memory, and I’ve now got 2GB of paging files out there. WTF? Literally, you have to quit and reload every 30 minutes or so if you want to keep your machine running. At a minimum. If you keep playing (ignoring the thrashing your HD is taking) the game eventually exhausts all memory, stutters, and dies.

OK, so you have to quit every 30 minutes. Annoying, but there you have it. Fortunately, it auto-saves after every turn. Or does it? Apparently, if you have a space in your profile name, the saves and auto-saves just don’t work. You THINK they’re working (there’s no error message) but they’re going into the bit bucket. Just gone. Never to be seen again. So once you quit (because of memory leaks) you have to start completely over.

All right, so make sure your profile is short with no spaces in it, quit every 30 minutes, no online play, and you’re golden, right? SUCKER. The save (autosave or manual) files that are being created seem to randomly be corrupt. I managed to eek out 45 minutes of play to complete most of a level last night. I thought I was pressing my luck with crashes, so I saved once more, and quit. Restarting the game, I tried to load my last save. Crash. OK, how about the last autosave? Crash. And the one before that? Crash, Crash, Crash. The only thing that worked was a manual save from the end of the previous level. So I effectively lost all my progress for the entire evening.

FUCK YOU VERY MUCH.

If this was a piece of hardware, it would be heading back to the store for a refund. But because it’s software, I’m stuck with this hunk of junk until someone there sees fit to work on the problems. To their credit, Freeverse seems to be saying they’ll make it work (judging by their posts in the forums.) But there is no time line.

I’m not even certain this is a problem with Cider itself. From reading the support forums for the Windows version, people there seem to be having very similar problems. But how in the world could they let this piece of junk out in the wild?

Bottom line – stay away from this waste of time until they get the bugs worked out.

Update: The 1.5 patch is available. It does seem to make everything more stable, though already corrupted games still won’t load. I recommend starting everything from scratch. We’ll see how this thing does as I go through the campaigns… again.