Last night I moved everything over to WordPress. iBlog, the previous OS X editor I was using had development stagnate and isn’t going to get a universal binary anytime soon. (Yeah, I know – I still need UBs for everything here, too..) I moved on to using Ecto, a pretty kick-ass editor that’s cross platform and has some active development behind it. And in any case, there’s still the web interface to WordPress.

Anyhow, I imported the posts through last September into the new system. All your old links will still work -the old static content is still there.

I’ve also re-enabled comments to the site, with some protections in place to help guard against SPAM bots and the like. We’ll see how that goes for a while. I previously have had to turn off commenting because of the ridiculous amount of time required to police it.

Check out this Ã¼ber-creepy monkey head mounted on a Roomba. I’m going to have nightmares for a week.

Is this thing on … I hate switching providers – everything breaks for a bit. If this makes it up there, I’ll be super surpsrised.

Update: Well slap me silly – it appears everything is back to normal. OK I admit – it was easier than I thought.

Daily Kos used to be my favorite place to get fairly solid reporting on political news. Yes, the thing is ridiculously skewed toward the liberal side of the fence and I tend to fence-sit, but the overall news gathering and digging really stood out with good links to source material and whatnot.

However, there’s been a downward trend toward inanity there, which finally pushed me over the edge today. The straw that broke the camel’s back was this one where there’s an entire article and 300+ comments devoted to proving once and for all that the idiot Lieberman’s new campaign ad shows a sunset (“a metaphor for the end of his senate career?”) instead of the obviously intended sunrise.

They’ve got someone digging up the original source material from Getty and lengthly, apparently serious, discussions of such important issues as:

1. This can’t be a sunrise because only sunsets cause red sky glow

2. Where this picture was taken couldn’t be a sunrise because the beach faces the wrong way

3. The found original source isn’t really the right one, there’s a slightly different one that is a better fit

4. Much mirth at Lieberman’s campaign manager who initially insisted that it was, indeed, a sunrise.

This goes on and on. As I read, I realized that these people were completely out of it. This is but one example of the idiocy that now typifies any given day at dkos. I can’t take it any more. The bad outweighs the good and it’s too time consuming to sort through the crap there. 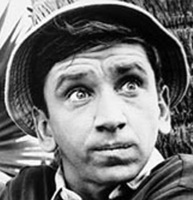 Bob Denver, aka Gilligan dead at 70. He’s to be buried in a coconut casket made by the professor.

Check out this article from the NY Times (ridiculous registration required.) It’s about a survey conducted regularly for the past 30 years by Jon Miller at Northwestern University Medical School in Chicago. Get this:

Dr. Miller’s data reveal some yawning gaps in basic knowledge. American adults in general do not understand what molecules are (other than that they are really small). Fewer than a third can identify DNA as a key to heredity. Only about 10 percent know what radiation is. One adult American in five thinks the Sun revolves around the Earth, an idea science had abandoned by the 17th century.

Read that last sentence again. TWENTY PERCENT OF ADULT AMERICANS THINK THE SUN REVOLVES AROUND THE EARTH. I can almost forgive the molecules and DNA – but the DAMN SUN?

I now know how people can wholeheartedly endorse such crap as intelligent design. They actually are completely uninformed, and probably don’t even know it. UN – FREAKING – BELIEVEABLE.

Check out this freaking senile old weasel! On CNN.com today there’s an article in which Robertson claims:

“I didn’t say ‘assassination.’ I said our special forces should ‘take him out.’ And ‘take him out’ can be a number of things, including kidnapping; there are a number of ways to take out a dictator from power besides killing him. I was misinterpreted by the AP, but that happens all the time,”

Done? Good. It doesn’t get any clearer than that. What the hell is this old fool thinking? We have him ON VIDEO for Christ’s sake. He’s outright LYING to the press about his comments.

“If he thinks we’re trying to assassinate him, I think we really ought to go ahead and do it,” said Robertson on Monday’s program. “It’s a whole lot cheaper than starting a war.”

If you think I’m messing with the video, see CNN’s version in the article linked above.

This moron is a complete and utter lunatic. Anyone who supports this idiot has seriously got a screw loose. He’s called for dropping a nuke on the state department, indirectly called for the deaths of three supreme court justices, and now this. This guy has lost his mind, I believe literally. Someone needs to get him back to his nursing home and crank up the meds.

And to think this man was a semi-serious contender for the Republican presidential nomination back in ’88. Very scary.

Update later in the afternoon: This guy really is some piece of work. First we have “If he thinks we’re trying to assassinate him, I think we really ought to go ahead and do it.” Then the very next day, “I didn’t say ‘assassination’,” despite unambiguous video evidence to the contrary. Now we have “Is it right to call for assassination? No, and I apologize for that statement.” Well, gee, isn’t that special. I’m glad that one of this country’s so-called religious leaders clarified his position on assassinating other heads of state. What a jerk.

Thanks to Tivo, I don’t see too many commercials, but tonight I was semi-paying attention and out of the corner of my eye saw this screen completely filled with a pore-revealing close-up of some woman shot by a semi-drunken baboon. It was for Tylenol. The woman went on to explain that she gets a lot of headaches “almost every day” and that she used to just take whatever was laying around to alleviate the pain. But then she learned that aspirin could cause problems with her stomach – problems she couldn’t even feel! And she says – “I’m not OK with that.” So she started taking Tylenol and now life is all peaches and clean toilets.

What strikes me as really freaking strange about this is that she says she gets headaches almost every day. But somehow this concerns her not one whit. It’s the theoretical damage to her stomach that gives her sleepless nights. That brain tumor keeps growing in her frontal lobe, but at least her stomach is A-OK!

Just nobody tell her about the damage to her liver that could be occurring by taking the stupid Tylenol every damn day. She wouldn’t be OK with that.

I personally nominate this for the dumbest commercial of the year.

Update: Check it out! An actual copy of the commercial. (2.0 MiB, Quicktime)